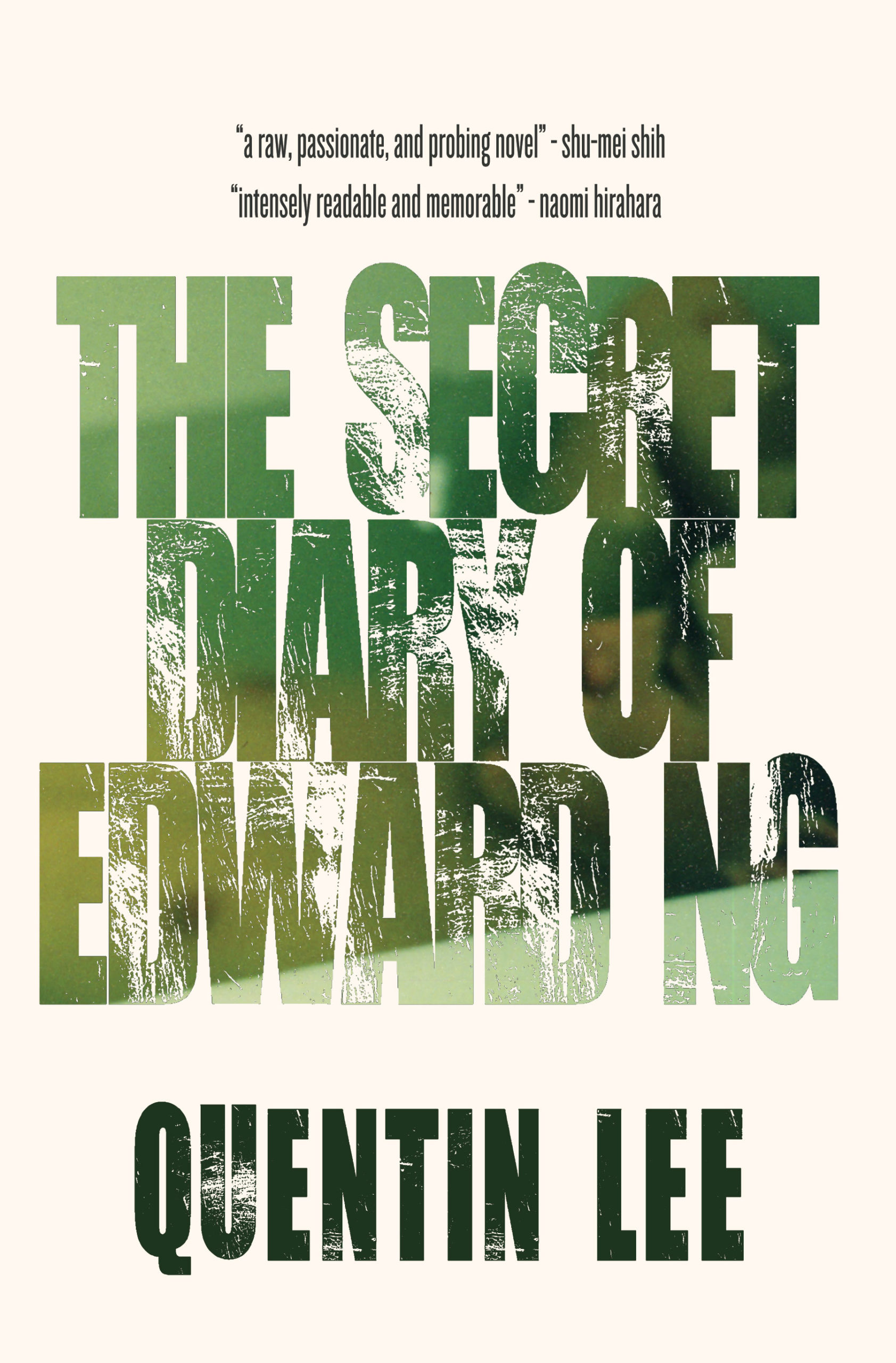 It’s Edward Ng’s last year at Berkeley. Set in the early 90s amidst campus protests, warehouse raves, and grad school applications, Edward is torn between sticking out in a non-monogamous relationship with his cute but flaky bisexual lover and consummating his unfinished affair with his closeted younger cousin. From his first sexual experience with his teenage cousin to hustling on the street to attending his graduation in drag, Edward embarks on an emotional roller coaster that unfolds his struggle to become a writer, his exploration of what it means to be gay and Asian in America, and ultimately his quest for connection.

“Acclaimed filmmaker Quentin Lee’s novel, The Secret Diary of Edward Ng, is cinematic, spare, and devastating in its portrayal of a young man in search of his identity. This novel brutally exposes the lonely spaces between family members and lovers as the story moves from Hong Kong and California. Intensely readable and memorable.”

“The Secret Diary of Edward Ng explores the most universal of themes: Love and Family. In this endearing coming-of-age novel, Quentin Lee gives us a full portrait of a young man’s emotional and sexual awakening. It is a story if 1990s Queer Asian life filled with the complexities of AIDS, identity, and full-blown curiosity. A remarkable achievement.”

“Quentin Lee’s novella is a raw, joyful, irreverent depiction of queer Asian-American youth. From his gleeful opening sentence to its final words, his hero takes us on a breathless ride through the pressures of a Cantonese upbringing, the struggle to define his identity as an Asian-American and a gay man, and the joys and perils life can offer and throw at him. Uncompromising and unapologetic,The Secret Diary of Edward Ng may or may not be autobiographical, but it demands to be read as a unique new voice in Asian-American Literature.”

“The Secret Diary of Edward Ng is an audacious and clear-eyed portrait of “becoming Gaysian” in the age of AIDS. Lee conjures a cast of fierce and promiscuous Asian American college students—anchored by the irreverent Edward—while spinning a moving coming of age narrative that could only transpire amid the magic mists of the Bay Area.”

“Written in beautifully cinematic language, Quentin Lee’s The Secret Diary of Edward Ng narrates a queer coming-of-age saga through fearless self-searching, sharpened senses and tangible feelings connected across the Hong Kong-US diaspora. Nostalgic but not sentimental, set in culturally diverse San Francisco during the AIDS era, the story bursts with the hubris of youthful vitality, and resonates perfectly today.“

— Shi-Yan Chao, author of Queer Representations in Chinese-language Film and the Cultural Landscape

“Edward Ng is one of the most honest persons I’ve read in fiction. Not only because he doesn’t hide anything in front of others but also he never lies to himself which is such a radical choice of lifestyle. Edward Ng’s story is not only valuable from an Asian Queer perspective but important for any complex identities which now apply to almost everybody. I see this book as a treasure box of Quentin, he is so generous to share with the readers. I hope you also enjoy it.”

“Quentin Lee’s “The Secret Diary of Edward Ng” follows its titular protagonist Edward Ng, an ambitious, soon-to-be Berkeley graduate. Much of the novel deals with the moral ambiguities  facing Edward in his life; the story unfolds in such a way without ever being prescriptive or didactic. Edward must simply make the hard decision to attend grad school as he must also reconcile with the confusion of his intellectual and sexual coming-of-age. Edward’s life is at times contemptible as it is redeemable—what could be called a kind of bildungsroman. Indeed he is a troubled young man who must navigate his many, at times, salacious, and estranged relationships, be it with his mother, lover, cousin, uncle and more. His story is mixed in with all that is the feeling of displacement, melancholia, reconciliation and sexual promiscuity, amid the political realities of the 90s and the HIV/AIDS crisis. Through this, Lee conjures the necessary nostalgia of a period that is, in many ways, being left behind for the new.”

“Quentin Lee’s ‘Secret Diary of Edwang Ng’’ is a raw, passionate and probing novel about being queer Asian against stereotypes of queerness and Asian American-ness.  The protagonist occupies a subject position that can be tentatively called a postcolonial queer, whose sensibilities are crisscrossed by multiple power relations in multiple locations.  Lee nuances the landscape of queerness with irony, melancholia, nonchalance, and creative abandon all at once.”

— Shu-mei Shih, Author of The Lure of the Modern: Writing Modernism in Semicolonial China

“Quentin Lee’s stylish debut novel, The Secret Diary of Edward Ng, undresses Hong Kong and U.S. society from the vantage of a new generation of sexually experimental youth. Lee brings his considerable skills as a feature filmmaker to his depiction of transnational families on the brink. Poignant moments interspersed with provocative sexuality give this novel an edge that takes you to the millennium.”

“His debut novel is as exciting as his films—raw, passionate and trendy all at once.”

The novel was originally published as “Dress Like a Boy” in 2000 and it was republished and retitled in 2019 as The Secret Diary of Edward Ng.

Available for sale on Amazon.com.

No comments to show.